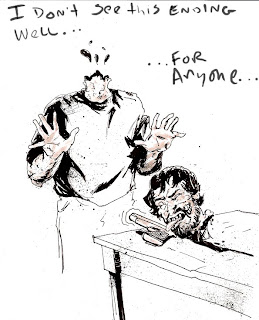 Uh oh...looks like someone's fed up with Eric's shenanigans!

So I want to kind of do a follow up on the last post about violence. I'd like to talk specifically about guns, and their use in drama. This was sort of fueled by a discussion I had with a friend of mine about this past sunday's episode of a certain horror-based television show.

So let's get right to the point: GUNS DO NOT EQUAL DRAMA. There is nothing I hate (HATE) more than when, in a dramatic scene or work, someone tries to ratchet up the tension and the suspense by having a character (or characters) pull out a gun. Now, I can understand why a writer would think this is a good idea, and that is best summed up by renowned screen writer of the Agent: Michael Scarn series:


I get it. Guns are dangerous, guns are volatile, guns have repercussions, and could go off at any time: what a perfect metaphor for a tense, dramatic scene (Why do Western duels work so well? Because we KNOW that someone is going to DIE)! Yeah, well, it's also a very lazy writing crutch beloved by lazy and/or bad writers. I was going to put up a clip from Tommy Wiseau's The Room, which is a tour de force of epically bad writing/execution (or is it an epically executed comedy? Who's to say?), but I thought that would be too easy. So Then I thought about R. Kelly's Trapped in the Closet, but that's waaaaaaaay too long to post here, but then I remembered this South Park clip that hits the nail on the head:


It's a shame I can't post the entirety of Trapped in the Closet, as it totally encapsulates trying to manufacture drama through tricks and cliches.

Anyway, so if one guy having a gun is lame, how lame is multiple guys having guns? Really lame, unless you're Quentin Tarantino. Tarantino makes it work because he recognizes what pulling a gun on someone means, and has no qualms about executing everyone in the room in order to display that. Those scenes are never toothless arguments that end in someone caving in order to move the scene along, they almost exclusively end with everything falling into chaos. Assuming you're not Tarantino, drawing a gun on a guy who has a gun, in a room full of guys who have guns is completely redundant, because if the gun symbolizes power, then there is no upper hand because everyone in the room has the equal amount of power! Not to mention, this whole cliche usually happens at a point in the script where you KNOW no one is going to get killed, or even shot, so 9 times out of 10 the audience isn't buying it anyway! If the audience knows it's just lame posturing, then why on earth would the character with the gun in his face feel any different?

As I said previously, guns are now forever linked with the undead, on a count of them being the most visceral, visually explosive way to dispatch them. This is fine, but I think when one is trying to tell a story about character conflict and interactions, guns shouldn't be part of the equation unless your characters are legitimately going to use them. If you've got an hour and a half to kill, do yourself a favor and re-watch Night of the Living Dead. It's a great character study about a group of people with volatile states of mind dealing with the tension of the situation they're in, AND THERE ARE NO GUNS! Ok, maybe there's like ONE gun, but even so, by the time it's taken out and used to threaten someone, it's already very clear that someone might seriously get shot.

In summation, GUNS DO NOT EQUAL DRAMA, and if you don't agree with me I swear to God I will shoot you.

Oh what the hell:
Posted by Clayton McCormack at 1:54 PM