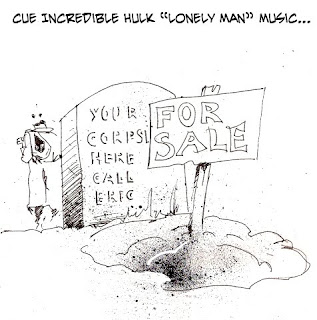 Hello Meat-Heads! As you can see by Eric's former home, there's some changes about! Yes, unfortunately, this will be the last blog post here at deadmeatcomic.blogspot.com.
HOWEVER, from now on, Evolution of An Idea will continue to update and post over at www.eatdeadmeat.com, so you can have your meat and eat it too!
Why the move? Well it seems like a perfect topic to cover here, so let's take a look!
When I started this blog, I knew that this site was not going to be the home of my comic Dead Meat, and while I built eatdeadmeat.com, this was the easiest place for me to do a blog, and it's been fantastic in the months that I've been using it. So I launched eatdeadmeat.com, and everything was great! I had a great first week, lots of hits, lots of eyes on my comic, but that was due pretty much exclusively to the fact that I was putting up a page a day for that first week, which kept people coming back. Once I settled in to my page-a-week format, pageviews dropped off dramatically. Yes, I can hear you fine when you say "No kidding, genius"--you don't have to yell. So when I took a step back I saw what I had: One site that updated one or more times a week (the blog), and another that updated once a week (the comic). I want people to see both of these...but at the time it didn't occur to me that having two separate sites could be a bad idea! In doing that I instantly cleaved the numer of hits eatdeadmeat.com could have, because half of its potential audience was going to another site, instead of RETURNING to eatdeadmeat.com more than once a week!
This brings us to what I believe is the golden rule of running a blog/website/whatever: people will come to your site only as frequently as you give them reasons to, and in the easiest way possible. Again, no need to yell, I can hear your heckles quite well. Yes, even you in the back, sir. I know this is an obvious thing to say, but sometimes it's the obvious things that get overlooked. Take those KFC/Taco Bell combos that are everywhere now. Can you believe that obvious combo had been overlooked for so long? Me neither.
Ok, ok! Anyway, my point is that I had these two related websites that were existing separately, not being able to maximize site traffic on their own, so I've decided to combine them into the monster that they now are. Hopefully you'll continue to read this blog at its new home, and hopefully you'll continue to enjoy Dead Meat as the story unfolds! What all of this basically comes down to, and also the point of this blog, is that this whole project is a learning process, and it's going to take me a while to get the hang of it, and hopefully anyone out there interested in doing the same will be able to learn from my mistakes. No one does it right the first time!
Until next time,
Eat Dead Meat!
Follow us on twitter for all your Dead Meat Updates!: twitter.com/deadmeatcomic
Posted by Clayton McCormack at 1:45 PM No comments:

Big Thanks on the First Week!

Hey there, Meat-Heads,
Just want to extend my thanks to everyone who's been checking out the comic over at EatDeadMeat.Com, and as a sign of appreciation I'll be extending the opening week of pages by two days, so don't forget to head back tomorrow and Saturday for pages 7 and 8!
So keep coming back, follow Dead Meat on twitter at Twitter.com/DeadMeatComic and stay tuned for a bunch of cool updates coming down the pipe pretty soon!
Thanks again, and until next time...
Eat Dead Meat!
Posted by Clayton McCormack at 3:14 PM No comments: 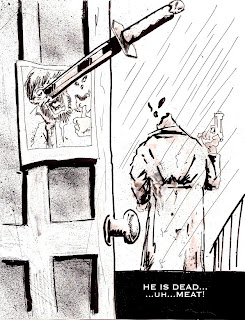 Welcome, Meat-Heads, I hope your new year starts off happier than Eric's here!

I hope everyone's had a chance to head over to www.EatDeadMeat.com to check out Dead Meat, the FREE, online comic I've been blabbing on about these many posts! If not...well...I'll get you eventually!
Which brings me to my next point: REVENGE. Revenge, as far as a dramatic device, is amazing. Seriously. Comparable probably only to love, revenge is THE most effective character motivation in terms of eliciting a visceral, base response from the audience (provided it's done well). Everyone loves a good revenge story, everyone loves to see the bad guy get theirs, especially if the way in which the protagonist has been wronged is particularly heinous, and it (along with love) is one of the few things powerful enough to BRING SOMEONE BACK FROM THE DEAD!
(Pour one out for Detective Frank Drebin while you watch this)
Now that is POWER! That clip is from Creepshow, which is an anthology-horror movie inspired by such comic books as E.C. Comics' Tales from the Crypt, Vault of Horror, Shock and Suspenstories, etc, which usually follow a formula pretty standard to the events in that video, but the "revenge from beyond the grave" plotline pops up all over the place, even in Hamlet! So if it's good enough for old Willy Shakes, it's gotta be good enough for us, right? And as we all know, the revenge story in Hamlet plays out like this, right:
Right!--wait, I mean no! Hamlet spends the better part of the play plotting, and thinking, and re-plotting, and over analyzing the consequences of his revenge! It's this attention to exploring the causes and effects of his vengeance that makes it so effective, which brings me to my next point: revenge without a solid, emotional connection to the audience is (most of the time) boring. This is why so many revenge plots involve that other giant of the character motivation world, love. People can identify quickly and personally with loss of a loved one, loss of a loved thing, and just the denial/loss of love in general, and can get a good, guttural response to seeing that injustice rectified.
However, many revenge-based stories are some variation on "you killed/kidnapped my ____, prepare to die!" And are usually followed by 90 minutes of carnage, and then at the end they kill the bad guy and they're fun, but you kind of don't really care. But why don't you care? I did just say that loss of a loved one/thing is a quick way to get someone on board with a revenge plot, right? So why don't these work all the time? Well, it's because you have to stew in it. Much like in Hamlet, you have to be completely entrenched and saturated with it, so when the revenge gets under way, you feel like there's real weight to the situation. One of my favorite revenge movies of all time is Tony Scott's Man on Fire, starring Denzel Washington. It's a pretty basic set up: Denzel is a disgraced former special forces guy or marine or whatever, who's taken a nothing job as a rich kid's bodyguard. The kid gets kidnapped, and he goes on a killing spree to get her back. This should fall into the "yawn" category, right? Well the reason that it works is that for the first solid hour of the movie, if not more, they build Denzel's relationship with the girl to such a degree that when the girl finally gets nabbed you KNOW that he is going to do anything and everything to get her back, and it's going to be awesome.
So when I started writing Dead Meat, as far as my main group of characters was concerned, I wanted to give them all a common motivation, something simple and identifiable that would allow the audience to get their "thing" quickly, and move on to focusing on the characters and their relationships. I didn't use revenge as such a heavy plot element as some of the examples I gave above, but it's safe to say that I felt revenge would be a more appropriate backstory than love...well I guess I could have gone with love...but that would have made for a pretty different story.
At the end of the day, you can't really go wrong with revenge. It's a feeling that everyone's had--the desire to get even with someone who's wronged them, or that neighbor's dog who crapped on your grass--and when it's done well, it is a very strong, very real character motivation that can resonate with pratically anyone. So be on the look out for my next book: a really well motivated story about a guy getting revenge on the neighbor's dog. Or is the dog the one getting revenge?
Until next time,
EAT DEAD MEAT!
p.s. I should have some updates on the comic pretty soon--there'll be original music soon, as well as the entire first issue being for sale digitally, so keep reading, and keep checking back!
Thanks!
Posted by Clayton McCormack at 3:29 PM No comments:

Alrighty, Meat-Heads! This is it! Head on over to www.EatDeadMeat.com RIGHT NOW and jump face first into the world of DEAD MEAT!!! Then when you're finished, spread the word, and build an army of Meat-Heads to execute my fiendish pla--uh...>cough<...I mean....do enjoy the comic.

EAT DEAD MEAT!!
Posted by Clayton McCormack at 12:01 AM No comments: